Considered individually, the various components of a crawler undercarriage — links, pins, bushings, sprockets, rollers, idlers, shoes and frames —seem relatively simple, straightforward parts. But make no mistake; when these components are assembled into a system that supports and propels a track-type machine, the dozer undercarriage becomes a complex mechanism, which, experts tell us, might account for half (or more) of a crawler dozer’s  lifetime repair bill.

Obviously, we can’t address the crawler undercarriage in as much detail here. But we can review some basics about design, wear factors (for chains and sprockets, in particular), maintenance practices and operating techniques, which, taken together, might help you curb undercarriage wear and, consequently, trim undercarriage costs.

In broadest terms, dozer undercarriages can be categorized by how the pins and bushings are lubricated — or not lubricated. The pins and bushings, of course, create the hinges in the track chain that allow the chain’s links to bend around the crawler’s sprockets and idlers.

The “dry chain,” which is assembled with no lubrication between the pin and bushing, is today not used much on mainline crawler machines, such as dozers, loaders and excavators — although some very large excavators might use dry chains if sales volume doesn’t justify development of a more expensive version. Dry chains are available in the aftermarket, however, and may be a good choice when cost is paramount or when servicing an older machine that has been relegated to back-up service.

Contrasting with the dry chain are lubricated chains, including the “greased chain,” which is assembled with a heavy lubricant between pin and bushing. The greased chain typically is used for hydraulic excavators, except, as noted, for some larger models, and among its benefits is quiet operation, compared with dry chains.

A third type of chain, commonly called a “seald-and-lubricated track” (SALT) uses a pin having an internal oil reservoir. A small radial hole in the pin allows the enclosed oil to fill the annular space between pin and bushing. During assembly, a self-sealing rubber plug is pushed into a small hole in the end of the pin, and a “needle” inserted into the plug allows a vacuum pump to evacuate air from voids in the pin-and-bushing assembly, into which oil is then drawn. 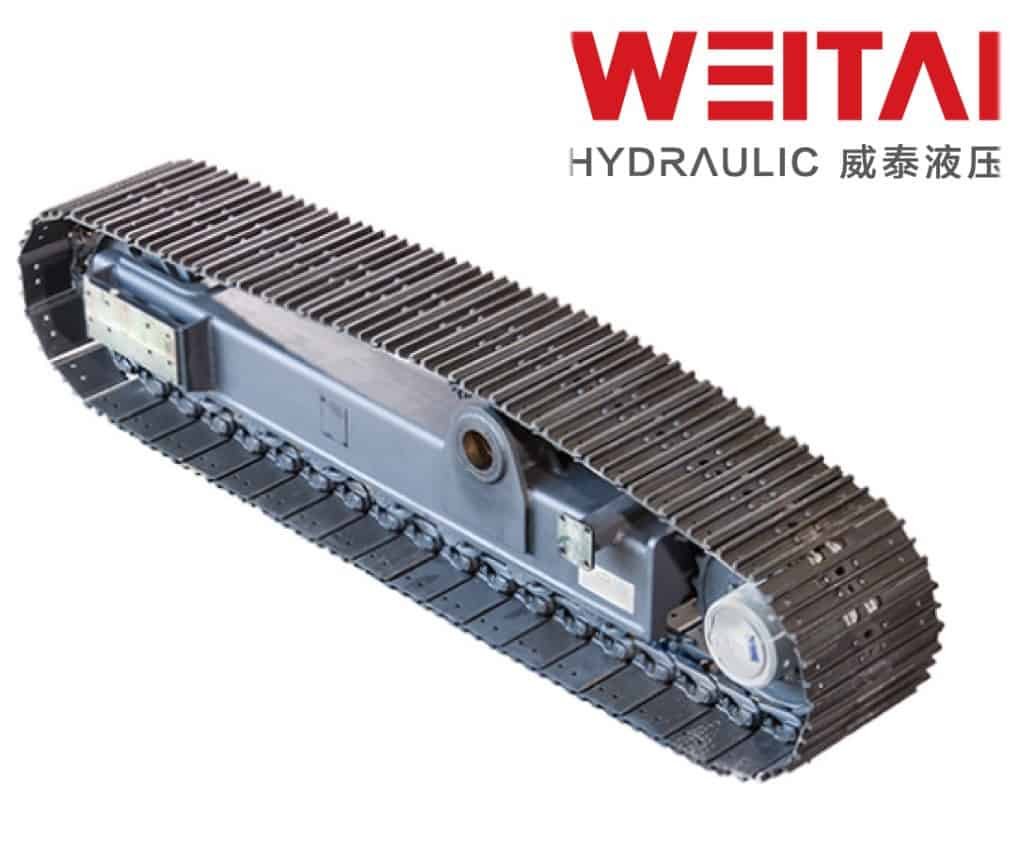 Although the greased track chain is more expensive than the dry, and the sealed-and-lubricated chain more expensive still, the latter two designs are widely used, because they significantly reduce a primary source of dozer undercarriage wear, namely, that between the outer diameter of the pin and inner diameter of the bushing. The longer life afforded by the lubricated designs, say manufacturers, more than compensates for their added cost.

With all chain types, the pins rotate within the bushings as the chain moves around the sprocket and idlers. When a machine travels forward, the pin rotates in the bushing under considerable load at about the sprocket’s six-o’clock position. The pin realigns at the top of the sprocket, but load is minimal. In reverse, however, relative motion between the pin and bushing occurs, under load, at the bottom of the front idler, at the top of the front idler, to a degree as the chain passes over the carrier roller, and then at the sprocket’s 12-o’clock position.

Within a dry chain, this relative motion between pin and bushing eventually wears down one side of the pin and the corresponding inner-diameter surface of the bushing. The resulting change in pin/bushing geometry allows the track’s pitch to extend, that is, the distance between pin centers becomes greater as wear progresses.

Given the way in which wear occurs in a dry chain on the pin and on the bushing (both internally and externally), these parts can be turned 180 degrees to bring new surfaces (both internally and externally) to the working area. Thus, proper pitch is restored. Replacing the sprockets when turning pins and bushings can yield a relatively restored system, assuming that other undercarriage components have not worn abnormally.

Although the same relative pin-to-bushing motion is occurring in the greased and SALT chains, the lubricant within virtually eliminates internal wear and, subsequently, eliminates the harmful effects of pitch extension on the sprocket teeth and the outer diameter of the bushings.

But, that said, normal wear does occur on the sprocket teeth and on the outer diameter of the bushings in lubricated chains. As the sprocket wears, its diameter essentially becomes smaller, and a “pitch mismatch” results, even though the distance between pin centers has not changed. The pitch mismatch causes a sliding motion of the bushing across the tooth, and eventually, external wear on the bushing will dictate a pin-and-bushing turn.

On greased chains, some would say, a significant number of seals may have failed by the time outer-diameter-bushing wear indicates that a turn might be in order, and as a result, a degree of internal wear may have occurred. Nonetheless, the lubricant has probably greatly retarded internal wear, and in so doing has minimized abnormal wear on the sprocket and bushings.

Because the SALT chain uses superior seals, estimates are that fewer than 10 percent of the pin-and-bushing assemblies typically have problems when outer-diameter-bushing wear indicates that a pin-and-bushing turn could be beneficial. Thus, sprocket and bushing life have been considerably extended, and turning pins and bushings could give the chain a second long life.

Experts seem to disagree, however, on specifically how to renew the SALT chain. Some are of the opinion that installing new seals and thrust rings, and then refilling the oil reservoir in the pin, basically restores the chain for capitalizing on the life remaining in the link rails. Others, though, caution that thrust rings in the link counter bores may have distorted the ends of the bushings, affecting a new seal’s ability to function effectively. If so, they say, a more economical fix may be to simply reassemble the pin and bushing with grease.

Even though we’ve gone on for a while about turning pins and bushings, do keep in mind that the decision to do so (or not to do so) is always predicated on the overall condition of the undercarriage. In some instances, simply allowing the chain to run to destruction might be the most economical strategy. It’s good advice always to consult with an dozer undercarriage expert about repair options, and even better advice to have an expert monitor the undercarriage at regular intervals.

It’s inevitable. The first time you place your new crawler machine in the dirt, the undercarriage begins to wear. As the machine’s sprocket levers the chain via its bushings, and as the rails formed by the chain’s links contact the rollers and idlers, small bits of metal are relentlessly ground away. Add in the abrasive nature of many materials, and the process accelerates, as it does also when track-shoe grousers slam against unyielding ground and intensify loads on undercarriage parts. And the faster you operate the machine, the faster the undercarriage wears, simply because the relative load between components increases.

But of particular interest is the wear between the sprocket’s teeth and the outer diameter of the bushings.

Keep in mind, too, that wear on the reverse-drive side of the sprocket tooth (as well as on the forward-drive side) can be greatly accelerated by chains that are too tight, whether because of improper adjustment, or because material from the jobsite has packed into the sprocket’s teeth. For example, a conventional oval chain exhibiting 1/2 inch of sag will be running with nearly seven times the tension, compared with the same track running with the recommended 2 inches of sag.

Perhaps the greatest wear-saving practice you can employ is to frequently visually check track tension when working in material that packs in the sprocket teeth. If the chains are tightening, readjust them on the spot. Considering the wear you’ll save — and the fuel you’ll save by relieving the engine of this extra load — it’ll be like putting money in your pocket.

Get the latest price? We'll respond as soon as possible(within 12 hours)